Garfield Elementary School opened during the post-World War II period known as the baby boom. In September 1949, there were approximately 12,300 students enrolled in Fairfax County Public Schools (FCPS) at 42 schools. By December 1959, that number would climb to 54,100 students at 84 schools. FCPS administrators had been projecting record enrollment growth for several years, but were unprepared when actual growth far exceeded their expectations. Rapid development of the Springfield area in the 1950s led to severely overcrowded conditions at Franconia Elementary School which, until 1953, was the only elementary school in the area.

Following World War II, the United States Congress appropriated financial aid to school districts impacted by the growth of the federal government workforce. In February 1951, FCPS applied for $241,500 in federal aid to build a school at Simm’s Corner near Springfield. In 1949, during the earliest planning stages of this school, the Fairfax County School Board chose to name it Garfield. Designed by architect Joseph Saunders, the original plans called for eight classrooms, a combined assembly room and cafeteria, library, administrative office space, and a clinic, with a total pupil capacity of 240. Garfield Elementary School was built by the Cowles Construction Company of Alexandria, Virginia. Shortly after construction commenced, it became evident that an eight classroom school would not suffice. Plans for an eight classroom addition to the building were approved during the winter of 1953, bringing the total construction cost to $452,000.

Garfield Elementary School officially opened on September 8, 1953. Our first principal was Woodrow Thomas “W. T.” Robinson. More than 525 children walked through the doors of Garfield on opening day. The Springfield Independent reported: “While construction work is being finished… some classes are meeting in the auditorium. As soon as the work is completed, however, facilities are expected to be adequate with an average of about only 42 pupils per room.”

By September 1955, student population growth in FCPS had jumped to 33,058 students at 61 schools. FCPS administrators hastened to build Lynbrook and North Springfield elementary schools to relieve overcrowding at Garfield and Crestwood, but construction proceeded slowly because there was very limited funding for school construction. It became necessary to operate some grade levels on a half-day basis, splitting the students into two groups who attended school in separate morning and afternoon shifts. Prior to the construction of nearby Springfield United Methodist Church, the congregation met on Sundays in our school. When the church building opened in the fall of 1955, FCPS rented 11 of the church’s Sunday school classrooms for use during the week as overflow classroom space.

I grew up in Springfield, in one house the entire time, and opened every new school. I was at Garfield from grades 1-4. My fourth grade class was held in the basement of the Methodist church. I was at Lynbrook for grades 5-6, Springfield Estates for grade 7, Washington Irving Intermediate for Grade 8, and finally Lewis High School for grades 9-12. Sheesh!
~ Nancy Byrd

I walked a mile to Garfield from Frederick Street. I was there from second through fourth grade until Crestwood Elementary School was completed. Our classroom was on the stage. I can still smell the Garfield cafeteria. It smelled like canned spinach and spilled milk. I used to hide my bologna under my plate. It fit perfectly!
~ Patty Flood

During the decade of the 1960s several major changes happened in the public schools of Fairfax County. In 1960, FCPS opened its first intermediate schools. Prior to this time, elementary schools educated children in grades 1-7, and high school consisted of grades 8-12. Seventh graders from Garfield were assigned to the newly built Washington Irving Intermediate School.

When Garfield opened, public schools in Virginia were segregated by race. In the early 1960s, FCPS began a slow process of desegregation, culminating at the end of the 1965-66 school year. Prior to this time, African-American children living in our area were bused to Drew-Smith Elementary School, an all-African-American school located at Gum Springs on Route 1. School segregation and residential segregation were deeply intertwined in Virginia. Since at least the early 20th century, legal land documents for Springfield area properties had language in them which was designed to permanently restrict the sale of the land to Caucasians only. The restrictions “ran with the land,” meaning that no future owner of the property could undo this practice. These restrictions were already in place on much of the land when developers purchased it, so homes in nearly all of the newly developed neighborhoods were exclusively sold to white families.

In 1965, almost every former all-African-American FCPS elementary school ceased operation (one notable exception is Louise Archer Elementary School in Vienna). These schools were located in predominantly African-American enclaves, necessitating the busing of students out of these neighborhoods to formerly all-white schools. In 1968, the Fair Housing Law was passed, eliminating racial barriers to homeownership. Garfield’s student body remained largely Caucasian until the 1970s, by which time the effects of the passage of the Fair Housing Law began to be evident in Fairfax County’s suburbs.

In 1962, a United States Army CH-47 Chinook helicopter made an emergency landing at Garfield Elementary School. Alumnus Stephen Dunn recalls, “It happened when I was in 1st grade. A second chopper landed and brought parts and repairmen. I remember they took all us kids out there and then we got to draw pictures about what we saw. Mrs. LeVan was my teacher.”

Did you know that when Garfield opened there were no kindergarteners in our school? A kindergarten program was piloted in several schools in 1967 and proved so successful that one year later FCPS implemented kindergarten county-wide. FCPS enrolled approximately 8,000 children in kindergarten in September 1968.

In October 1949, the Fairfax County School Board agreed to adopt the name Garfield for our school, but in July 1952 the community voiced opposition to this name, preferring the name Springfield Elementary School instead. The Board agreed to the community’s request, but reversed its decision in January 1953 because another school, later named Crestwood Elementary, was under construction in the Springfield area. Learn why the name Garfield was chosen in this video produced for Fairfax County Public Schools’ cable television channel Red Apple 21.

Since 1953 there have been three additions to Garfield Elementary School. The first was built in 1968 by the M. L. Whitlow Construction Company at a cost of $527,000. This addition consisted of a gymnasium, music room, and science room, and enlarged the building capacity to 660 students. The first building-wide renewal took place in 1990 at a cost of $2.8 million, and the most recent renewal and addition to our facility was constructed in 2013.

Travel back in time, from 1937 to 2017, and explore the evolution of Garfield Elementary School in this series of aerial photographs courtesy of Fairfax County’s GIS & Mapping Services. 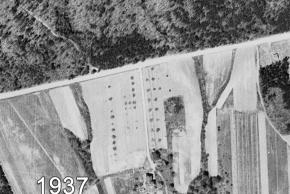 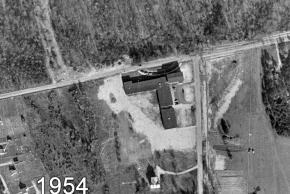 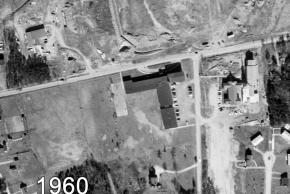 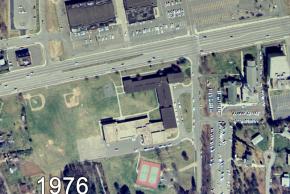 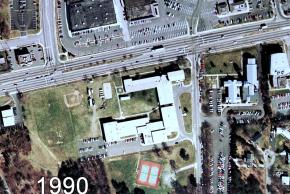 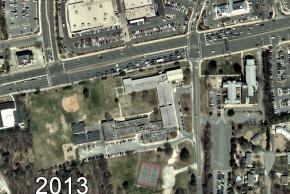 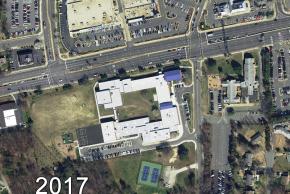 Our Library and Cafeteria

In 1993, the Fairfax County School Board passed a resolution naming our library "The Helen Dusault Memorial Library." Helen Dusault taught at Garfield from 1963 until her retirement in June 1973. She returned to Garfield and served as a part-time secretary in the library from September 1973 through June 1988. In 2006, the School Board passed a resolution naming our cafeteria "The Paul Knott Cafeteria." Paul Knott was the building supervisor and custodian at Garfield for 23 years. During that time he garnered numerous accolades for the tremendous care, attention to detail, and passion he put into his work to make Garfield a safe environment for students and staff.

Garfield's School History was written with assistance from Robyn Carter and Allie Guidry.